The Leeds Memorial Hall, more commonly known as the Leeds Hall is where the Parish Council hold their meetings. The hall takes its name from the Leeds family who were instrumental in raising funds for the hall, but who were they?

The Leeds were ‘gentlemen’ farmers’ who came to Eyebury in 1810 and at least four generations of the family lived there for the next 100 years. The family name became famous in palaeontology due to the work of Alfred Leeds. Over time he amassed one of the largest collections of fossil vertebrates in the world with major international significance, including the fossils of one of the largish fish that has ever swum in the world’s oceans, Leedsichthys, pronounced Leeds-ICK-thiss, which is named after him. 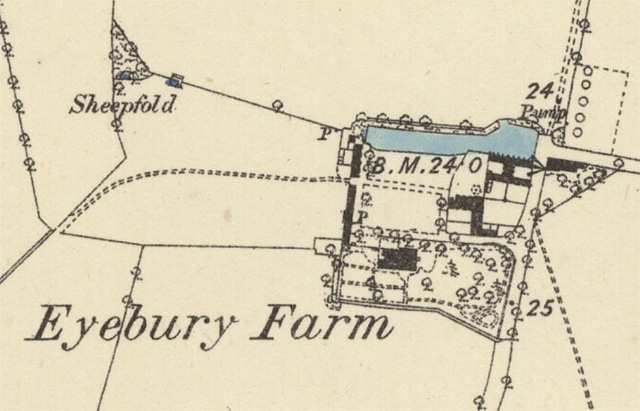 Map of Eyebury Farm in the late 19th Century

Alfred was born, raised and lived at Eyebury farm and was educated at Warwick Grammer School. He desired to follow a medical career but circumstances necessitated his assuming the management of Eyebury farm from 1868.

It was Alfreds’s elder brother Charles, a student at Oxford University, that started collecting fossils. While at university he was encouraged by a professor at the university, John Phillips to persevere in collecting fossils from near his home. He was soon joined by Alfred, and the two brothers gradually perfected methods of extracting the skeletons from the soft clay which were more scientific and thorough than had ever been attempted before.

In 1875 Alfred married Mary Fergusson and the couple had five sons. It was Mary who was pivotal in raising the funds for a new community hall in the village and went out of her way to collect money. She ended up raising nearly all the money required to cover the cost of the land and building.

In 1887, Charles emigrated to New Zealand; but Alfred continued to search for fossils, assisted by his wife and by their second son, Edward Thurlow Leeds. Over the following years, he amassed one of the largest collections of fossil vertebrates in the world. From 1890 onwards, he began to present his most important specimens of Jurassic fossils from the Oxford Clay around Peterborough to the British Museum.

In the 1880s he acquired the skeleton of a stegosaur dinosaur found in a brick pit near the village. In 1887, it was described by John Whitaker Hulke, who was president of both the Geological Society as a new species, Omosaurus durobrivensis.

The scientific value of his results was acknowledged by the Council of the Geological Society, which he was a member of, in 1893, when they awarded to him part of the Lyell Fund. The fund is awarded to contributors to the Earth Sciences on the basis of noteworthy published research. 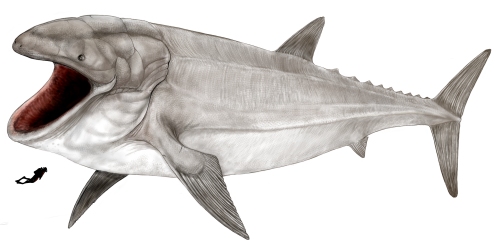 Illustration of Leedsichthys Problematicus [Relevant size against a human being)

One of Alfreds most famous finds were the fossils of an extinct marine animal called Leedsichthys which he found in the vicinity of Eyebury in 1889. It’s a giant fish that could grow to 16m that lived in the oceans during the middle of the Jurassic period,155 million years ago.  The largest fish today is the Whale Shark which can grow to over 18m.

On 22 August 1888, the American dinosaur expert Professor Othniel Charles Marsh visited Leeds’ farm at Eyebury and quickly concluded that the fossilised bones represented the skull bones of a giant fish. The finds proved to be especially important and were named in Alfred’s honour by Arthur Smith Woodward, Assistant Keeper of Geology at the Natural History Museum at in 1889.

Part of his collection was acquired by the National Museum of Ireland – Natural History in November 1893. Other museums in the UK and elsewhere hold items from his collection.

Alfred died in 1917, most his spare time during his adult life had been spent recovering the remains of fossils from the brickfields in the Oxford Clay near Peterborough.

His obituary had some further insight into his day-to-day life: “Those who had the privilege of Mr Leeds’ friendship will always retain happy memories of the hospitality of Mrs Leeds and himself at Eyebury. He lived in the picturesque fenland farm that was formerly attached to the Abbey of Peterborough, and the thick walls, with a remnant of the moat, were an interesting memento of other days. His museum occupied the attics of the house, and the old farm-office was always filled with boxes of the latest discoveries awaiting preparation. Odd trays of specimens in progress were also kept in sight in other rooms to occupy leisure moments. His interests, however, were by no means confined to his fossil bones. He was alive to the progress of science in all ways, and he took an especially active part in local affairs. His loss, indeed, will be mourned by the whole community.”

After Alfred’s death his wife, Mary, went to Oxford to live with her son Edward. The farm was then sold to a Charles Patston with all 304 acres of land. Mary died in 1922. 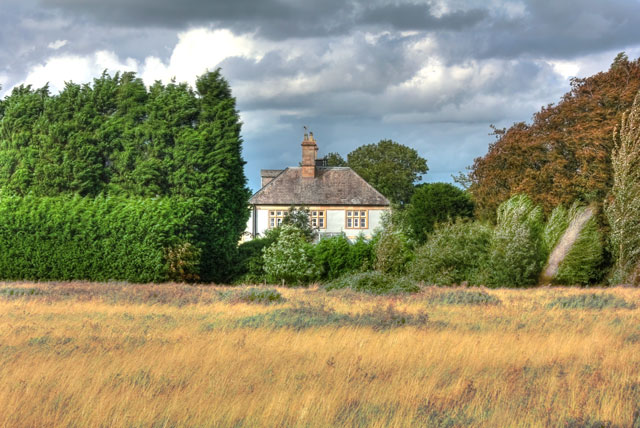 Edward Leeds was the only one of Alfred’s sons to really take any interest in palaeontology. Edwards who was named after his grandfather was also born at Eyebury. After ill health caused the end to his career in the Federated Malay States Civil Service in 1903 he spent five years convalescing. Much of his time was spent in the nearby gravel pits where his interest in archaeology developed.

He became famous through his work with Anglo-Saxon archaeology and went on to be a keeper of the Ashmolean Museum in Oxford until his retirement in 1945. Many of his finds are still on display there and at Peterborough museum.