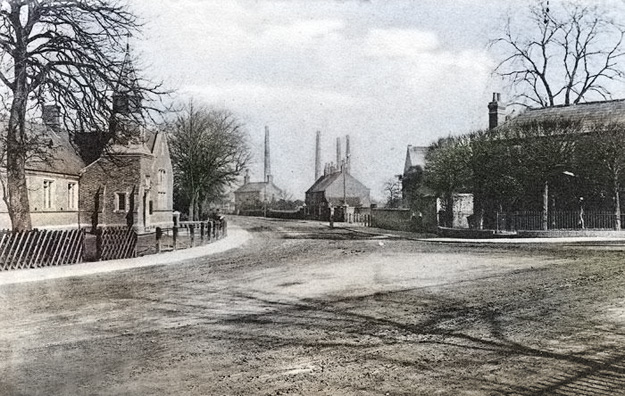 The Victoria County History was founded in 1899 as a national project to write the history of every county in England. The work continues until this day. At its inception, the project was dedicated to Queen Victoria, which is how it derives its name.

The parish of Eye extends over an area of 2,711 acres, the soil in some parts presenting the characteristics of the fenland, while in others it is of a mixed kind upon Oxford clay or alluvium. The industries are chiefly agricultural with the modern and successful addition of brick-making, which is carried on principally at Northam and Eye Fletton. In consequence of this industry, Eye is more populous than most villages of this district; there were 1,366 inhabitants in 1901. Bridges, writing in the early part of the 18th century, alludes to the pursuits of fowling and fishing which had occupied many of the inhabitants before his day, but which had then died out.3 There are 1,564 acres of arable land and 902 3/4 of pasture.

The village consists of one long wide street, being built, as its name implies, on an island in the fen, along a ridge of gravel, on which runs the road from Peterborough to Crowland. The outlying houses of Northolme, Eyebury, and Oxney all owe their existence to the same cause, being built on outlying ridges running north or south from the main settlement. The fen is long since drained, but the contours of the land are still to be seen.

The manor house, the residence of Mr. Arthur Page, on the north side of the street, has one room with good 18th-century panelling but shows nothing of earlier date, and there is no other building of any architectural interest in the street.

In the village is a Primitive Methodist chapel, and a Methodist Free church, opened in 1851. The National School was built in 1855, an infant school being added in 1874.

The railway station is at Eye Green, on the Midland and Great Northern Joint Line from Peterborough to Wisbech.

An alarming incendiary fire, aggravated by scarcity of water and a prevailing hurricane, broke out in the village on Monday, 28 November 1848, doing damage to the extent of £1,500 before the opportune veering of the wind southward saved ‘the beautiful village of Eye from being laid in ruins.5  The parish was enclosed in 1820; the award is in the custody of the parish council.

Eye was confirmed to Peterborough Manor in the charter of Wulfhere, and is included in the less comprehensive confirmation of King Edgar.1 It is not mentioned in Domesday book, but about 1125 the abbey was holding 1 1/2 hides of land in Eye and a certain William of Eye held 1 virgate and served with the Knights.2  Richard I and Henry III confirmed Eye to Peterborough in terms almost identical with those used in the charter of Wulfhere.3

This manor appears to have been kept in hand by the abbot to supply the needs of the monastery. In 1307 the abbot granted to the brothers at the cell of Oxney thirteen stone of cheese every year from the manor of Eye, and every level between the invention and the Exaltation of the Holy Cross (2 May to14 September) a quarter stone of butter and two gallons of milk.4 The land at Eye was divided among a number of smallholders.5

Eye was one of the occasional residences of the abbots of Peterborough. Homages are frequently stated to have been performed there,6 and from the end of the 13th century, it is sometimes called the manor of Eyebury or Ibury, probably the name given to the manorial buildings. Abbot William of Woodford (1295-9) built a windmill and began a hall there,7 which was finished by his successor, Abbot Godfrey (1299-1321), who also built a new house with a bakery and dairy, and enclosed land for keeping wild beasts.8 This is probably the origin of the abbot’s park of Eyebury referred to in the 14th century.9 In the third year of his abbacy Godfrey replaced the windmill built by his predecessor, which had been destroyed by fire, and later he built a great stone grange, which was burnt down through the spontaneous combustion of damp hay in the time of Adam Boothby (1321-38). He also made many other additions to the manor house and buildings.10

At the dissolution the manor of Eye was granted to John, Bishop of Peterborough,11 and the capital messuage of Eyebury, with Eyebury Park, formerly leased to John first earl of Bedford, was granted to him in fee,12 and still remains in the possession of his family, now represented by the duke of Bedford. A farmhouse occupies the site of the mediaeval building but retains no ancient features. It is now the residence of Mr Alfred Nicholson Leeds, a well-known geologist.

In 1649 the Commissioners for the sale of Bishops’ Lands sold to John Bellamy the manor of Eye and the farms of Singlesole and Northolme, which had been leased to Queen Elizabeth for seventy years from July,1601.13 This sale was rescinded at the Restoration. In 1860 the land in Eye belonging to the bishop was vested in the Ecclesiastical Commissioners,14 and shortly after the bishop was endowed with the manor,15 which still remains with his successors. Several court rolls for this manor exist at Peterborough, the earliest being of the time of Richard II. There is a roll for nearly every year during the first half of the reign of Henry VIII.16

The abbot of Thorney had some interest in Eye during the 14th century. In 1305 he complained that Godfrey, abbot of Peterborough, and others ‘lately by night raised a dike across the highroad at Eye leading from Peterborough to Thorney,’ and which was used by the abbot for carrying corn and other necessaries.17 The next year this dispute was amicably settled through the mediation of Walter Langton, bishop of Coventry and Lichfield, the abbot of Peterborough allowing the abbot of Thorney and his men and guests to use the road at their will from ‘a place in the water of the Neen called Herlotesforthe to the village of Eye, to the breadth of 15 feet.’18

In 1330 the abbot and convent of Thorney gave up to the abbot of Peterborough all right of common in Northolm and Eye, saving common pasture in the marsh where they were accustomed to have it.19

NORTHOLME (Northam xvi cent.). – Abbot Godfrey ‘began … a manor at Northolm where there was never before a manor.’ He enclosed the pasture of Cranmore, and in its west part planted a wood which he called Childholm,20 and obtained the grant of a market there every week on Thursday, and a fair to last two days on the eve and day of the Exaltation of the Holy Cross22 (4 September). The day was changed later to the eve and day of St. Matthew (21 September).” He also built a chapel,23 setting aside 100s. for the maintenance of a priest there to pray for his soul and the souls of the benefactors of Peterborough. The priest was to be lodged in the manor of Northolme.24

In 1535 among the possessions of Peterborough was a wood called Northolmwood and Okeholt, in the lordship of Eye, containing 9 1/2 acres.25 This is perhaps the wood planted by Abbot Godfrey, and there is still a wood bearing the name of Northolme in the parish of Eye.

Northolme was granted to the bishop of Peterborough in 1541,26 and with the manor of Eye was leased to Queen Elizabeth, and sold in 1649 to John Bellamy.27

The farm was taken over by the Ecclesiastical Commissioners in 1860, and returned to the bishop in 1862 as part of the endowment of his see.28 No part of the farmhouse appears to be older than the 16th century, but there are a few pieces of 14th century detail in the garden. One of the ground-floor rooms has a good 18th century fireplace and panelling.

SINGLESOLE (Singlesholt xiii cent.. Singleholt xvi cent., Singlesoule xvii cent.).—The ‘ hermitage of Singlesholt’ is mentioned in the spurious charter of Wulfhere as an appurtenance of Eye,29 and is also confirmed to Peterborough in the charters

Richard I and Henry III.1 Abbot Godfrey in the 14th century gave all the timber for the ‘camera’ a single sole, which Hugo de Riseburge, then ‘pittancer,’ had caused to be made.2 There are several accounts of the profits of Singlesole during the reign of Henry VIII at Peterborough. The oblations of the chapel, firm of the fisher}’ of Catteswater, which still exists, and the ferm of the ‘manor’ in the hands of some tenants, are alw.iys mentioned.3

The ‘manor’ of Singlesole was granted to the bishop of Peterborough in 1541, and with Eye was leased to Queen Elizabeth, and sold in 15414 to John Bellamy.5 A farm now stands on the site of the monastic buildings. There was a chapel at Singlesole under the patronage of St. Michael, built by Godfrey de Crowland before he became abbot.6 The site of it is at the present day included in the farm buildings and is just within the eastern boundary of the Soke of Peterborough and of the county of Northampton.

TANHOLT – The name of Tanholt occurs in the Peterborough records as early as the 14th century. Abbot Godfrey made a new ditch between Tanholt and another pasture, also a rabbit warren at Rumpele, a close afterwards annexed to Tanholt.7 Some of the officials of the monastery had common pasture at Tanholt for the animals from the manors annexed to their offices.8 At the surrender of Peterborough in 1539 Tanholt evidently passed with Eye into the king’s hands, and was granted with Eye to the bishopric in 1541,9 for Bishop Scambler entered into an arrangement with Queen Elizabeth in 1570 to hand over to her the lands of Tanholt in return for payment of a fee-farm rent to the bishop.10 The queen at once included these lands in a grant made in the same year to Lord Burghley.11

In 1754 Tanholt, described as a ‘manor,’ was in the hands of timothy Brecknock;11 in 1794 in those of Edward Knipe.13 Mr. H. R. Knipe is now the owner. Before the dissolution of Peterborough Abbey, there was a chapel at Eye belonging to the abbot, in which homages were sometimes performed. The patronage of the present church belongs to the bishop of Peterborough.

The church of St. Matthew was built in 1846 on the site of an ancient church which was pulled down. It has a shallow chancel, north and south transepts, and nave with west tower and spire, and contains nothing of interest except the font, which belongs to the last quarter of the 14th century. It has an octagonal bowl and shaft with projecting buttresses at the angles of the bowl, carried down to the base of the font without a break, the effect being very good. The sides of the bowl have crocketed cinque foiled arcades, and at the lower edge are figures of angels. The church is one of the last of Basevi’s works, and the spire is very well designed.

There is a record of the dedication of the former church in 1543,14 but from drawings of it that have been preserved it is clear that the building was at any rate two centuries older than that date.15 It was a small building with a chancel, nave and south aisle, and a western bell turret.16

Victoria History of the counties of England – Eye