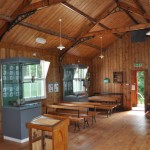 The earliest mention of the hall dates back to August of 1894,  the year of the Local Government Act when elected parish councils were created. The Leeds family were very instrumental in the raising funds for the new hall.  It was officially known as the ‘New Room’  but over time was also known as ‘The Iron Room’ or ‘Tin Tabernacle” as it was originally was built of timber and clad with corrugated iron sheets. These types of buildings were very popular at the end of the 19th century as corrugated iron was cheap and buildings could be constructed in a short time.

In August of 1894, a bazaar was held in the grounds of the of Eyebury House to raise money for the furnishing of the planned Parish Hall. The event included flower, poultry, jumble and refreshment stands and a band. Lord Burghley had been invited to open the Bazaar. In his opening, he remarked that “considering how people were to live in the future, to be well educated, highly clothed, and magnificent manners the village must have a public room where these fine clothes and fine manners could be shown off. He could imagine nothing more useful than a parish room.”

A few months later the new hall was opened. The Advertiser of October 1894 reported on it: ” OPENING OF A VILLAGE ROOM. Through private enterprise, the parish has now a decent room wherein meetings and entertainments may be held. The pioneers of this latest institution in the village have been Major and Mrs Leeds, Mr Moors, Miss Godfrey and Miss Moore. But upon Mrs Leeds, the bulk of the work seems to have fallen. She has collected far and wide amongst her friends – very largely in Scotland – and almost wholly provided money to pay for the cost of the ground and building. Whilst the Working Guild embracing the above – mentioned names and a number of other ladies, have provided entirely the furnishing account. The total cost has been about £300. The building is well situated in the centre of the village. It is of corrugated galvanised iron, 25 feet by 50 feet, and has seating accommodation for 210 persons. It is lighted by five windows on either side and the interior is elegantly lined with varnished pine. It is put a little way back from the pavement on the church side of the village and is enclosed by neat iron railings. The brickwork was done by Mr Hawkins, of Fletton, the building itself supplied by a London contractor*. There was, of course, on the opening day the inevitable tea, and to this, over 200 sat down. The ladies who assisted in the catering included: Miss Godfrey, Mrs. Love, Miss Twelvetree, Miss Whittle, Mrs. Bottam, Miss Thompson, Mrs. Tilley, Mrs Burkett, Mrs. Thompson, Miss Saunders, Miss Fowler, Mrs. Stimpson, Miss Whittle, Mrs. Forth, Mrs. Steels, Miss Wright, Mrs. J. Griffin, Mrs. Bothamley, and Mrs. Copeland. The room looked wonderfully bright and cheerful despite depressing atmospherical conditions, and congratulation was heartily exchanged upon the construction of the hall, even as a private venture. A piano has been secured also through the efforts of Miss Moore and Mrs Leeds. After the tea, which was most sumptuous and enjoyed by everybody, Major Leeds expressed his delight at seeing so many people come together as what-what was, in reality, the inaugural gathering. and as the event was one requiring due celebration, he had asked Dr Walker who was well known to all of them, to declare it open (applause) – Doctor Walker, in doing so, said that it afforded him very much pleasure to be able to perform so interesting a ceremony as to declare open for parochial purposes the hall in which they were assembled. It was very desirable that there should be some such building in a parish of that size and he was sure to Mrs Leeds and her co-workers the thanks of the community were due. There they would be able to meet for lectures and gatherings, social and educational for the good of the parish. It was an age of educational progress. They only had to look around them and see how technical and other education was advancing, in fact being promoted by the Imperial Exchequer. The social and educational life of the people was being carried out so thoroughly that is would really mean that in their towns especially the working day would have to be shortened; work people would have to start their labour later in the day. this was what he thought it would come to. The spirit of self-improvement was possibly never more apparent than now, although it had its parallel in cases within his knowledge. For instance, he remembered that man named Sisson, a native of Newark, was a groom for his (Dr Walker’s) father. One morning his father went to the manager and found a book in it, and on examining it discovered it to be Latin grammar. He enquired of Sisson whether “he wanted to learn Latin, and he replied, “Oh yes,” he had seen the Latin inscriptions in the surgery, and thought he should like to learn all about it. With his father’s help, Sisson got to be a very fair Latin scholar, and he then wished to pass his examinations as a medical man. His father (Dr Walker. sen) thought it hardly possible, as it would cost so much, but as Sisson seemed anxious he found a friend in Herefordshire to whom he apprenticed the groom. He afterwards proceeded to Glasgow University, and subsequently held an important position on the staff of Glasgow Infirmary. There then occurred an epidemic of cholera, and he caught it, but when he had recovered they made him a resident medical man in the fever hospital. There he contracted typhus fever and died. This was one of many instances what application and determination might do, and he hoped in the building of that hall the social and educational life of Eye would be stimulated (applause). – The room was subsequently cleared and re-admission were taken to view a magic lantern entertainment, “Campaign in Matabeleland,” given by Rev. C. W. Holdich and Major Leeds. There were more applications for admission than there was accommodation for.”

* The contractor was very likely to have been Humphrey’s and Frederick Braby or David Rowell & Co who were two of the largest makers of iron buildings in the country at the time. 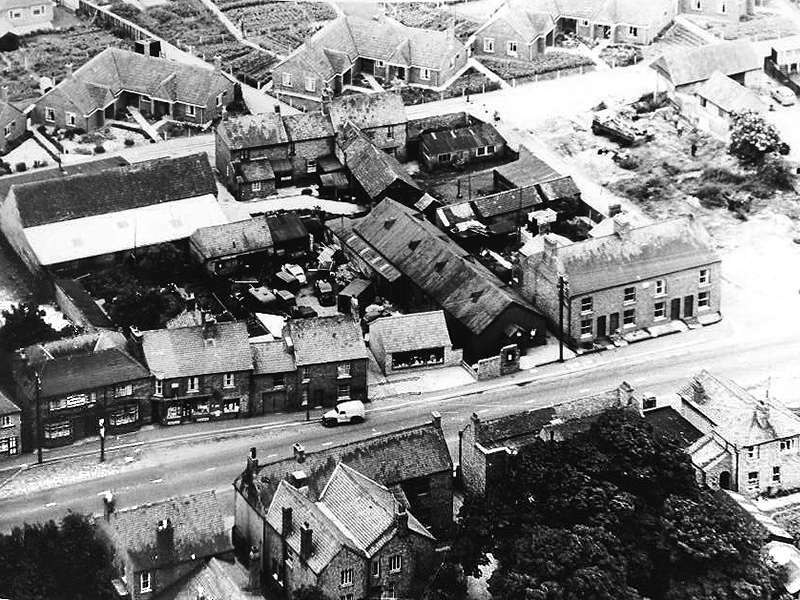 From a newspaper clipping dated December 20 1913:  A fancy dress ball was held in Eye in the Iron Room in aid of Peterborough Infirmary. Crowland String Band played for the dancing. The Committee (Mr A. Neaverson, Mr T. Oldham and Mr W Crockford) acted as M.C.s. There were some very nice costumes there including: (Mr. T Oldham), Cowboy, (Mr. A. Neaverson), Charles I, (Mr O. Yates), Courtier, (Mr L. Neaverson), Prince (Mr T. Twelvetree), Indian Chief, (Mr V. Parnell, Crowland) Pierette, (Mrs. T. Peach), Shepherdess, (Miss E. Mayes), Mercia, (Miss E. Neaverson), Greeby, (Miss L. Crow), etc. A letter has been received from Mr Taylor, secretary of the Peterborough Infirmary, acknowledging £1, and thanking all those who helped make the dance such a success. It must have been quite the event…

In 1920 ownership transferred to the Parish Council and at the same time it was named the Leeds Memorial Hall, now more commonly called the Leeds Hall in gratitude for all the work the Leeds put into raising funds to build the hall. It was at the centre of war efforts in the village in both the first and second world war with the Eye Patriotic Society holding their meetings there.

The current brick building was built in the early 1970s. The construction is a story in itself.

Eighty-four years of use was starting to takes its toll on the old hall.  No major improvements had been made to the building since it opened and according to reports at the time the building was in poor shape and would have to close without major refurbishment. In 1969 plans to replace the hall began. At a parish council meeting in April 1970, the scheme to build a new hall on the same plot as the original was outlined. It would have a new kitchen, bar, entrance hall, inside toilets and be of brick construction. It was designed by architect Mr E Titman. The parish council had already asked for tenders, the lowest tender was given as £8,300 (around £102,000 today). To complete the new hall in one go, rather than in stages, the Parish Council would have to borrow £4000 from the Ministry. The work was planned to start as soon as the loan was approved.

On the 15 May 1970 large headlines in the Peterborough Standard said: “MINISTRY SAYS ‘NO’ TO LEEDS HALL LOAN – The re-building of the rear of the Leeds Hall is to be the first step in the restoration programme. This was decided by the Parish Council on Friday after it had been reported that the Ministry of Housing and Local Government had refused permission for a loan to be taken up before 1971-72.” Because of this, the council decided to go back to the original plan and build the hall in stages starting with the toilets at the rear of the building. The doors to the rear would be boarded up so the hall could still be used for any organisation that didn’t need toilets.

By August 1970 the contract had been awarded but members of the council were threatening to revoke the contract as work still hadn’t started and award it to F. W. Dighton. Again in December members of the parish council where concerned that that progress was too slow and bookings were being cancelled. The new toilet block and office was eventually completed in April 1971.

By July 1971 the £4000 government grant had been approved. A quote of £6,863 was accepted from F W Dighton and Son to complete the final stages of the build. Construction on the new hall started on Thursday 9 September 1971. The parish council clerk at the time, Mr Bernard Siddall, said work was expected to last 21 weeks. While construction was taking place the Parish Council would have meetings in Kendall’s Room, which was behind the shop on the corner of Eyebury and Thorney Road. The shop is now a private home, the room is still there but now just used for storage.

The renovated hall was nearly complete by May 1972 and a special meeting was to be held to discuss matters relating to the opening of the hall.

The first event in the newly renovated Leeds Hall was held on Tuesday 6 June 1972. Around 150 members attended an Over 60’s rally with members from Eye, Northborough, Glinton, Peakirk and Deeping Gate. After attending a community service conducted by Rev P J Randall at St Matthews Church during the afternoon refreshments were served in the Leeds Hall. A social evening followed which included bingo and competitions.

Today the hall is used for Parish Council meetings and many community functions including; carpet bowls, slimming classes, coffee mornings, fundraising events, WI, weddings and birthday parties. In 2013 it was fully refurbished with new lighting, a new boiler, new cooker, refurbished kitchen and bar area, redecorated hall and new curtains. In 2016 the toilets were also refurbished and in 2018 the building received a new roof.

If you have any memories or photos of the earlier Leeds Hall please contact us here.