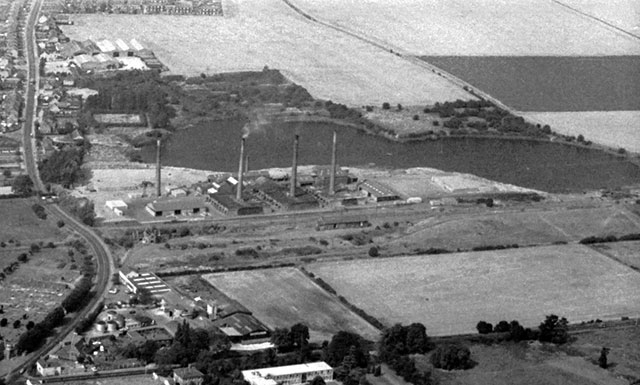 Brickyard and the pit in the 1980s

Quarrying in the area that makes up Eye Nature Reserve dates back to the late 19th century. The lake was created by the excavation clay, sand and gravel. The clay was used to make bricks in the adjacent Northam Brickworks. Brick-making continued on the site until 1990 when the works closed. The site where the works were located is now a housing estate but the lake and surrounding woodland remain in public ownership. Locally the lake has also been known as the ‘knothole’.

Digging on the site started in a small sand and gravel pit opposite the junction of what is now Green Road and Crowland Road. The sand was reported to be some of the ‘best in England’. It was during the exploration for sand and gravel that the lower layer of clay was discovered. 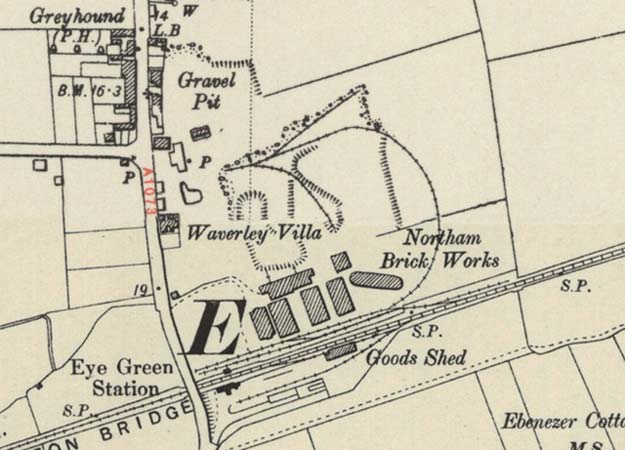 This clay, called ‘Lower Oxford Clay’ has a very high inbuilt fuel content that ignites and brings itself up to full burning temperature without the need for using coal. This also makes the bricks cheaper to produce and was one of the main reasons for the growth of the brick industry in the Peterborough area. Clay is still excavated to the south of the village in nearby Whittlesey.

The layer of clay was laid down over 150 million years ago in the Jurassic era and is known for its rich fossil record of fish and invertebrates. Local man Alfred Leeds who lived at Eyebury discovered the fossils of small ichthyosaurus and part of a plesiosaurus in the Northam pit in Eye. 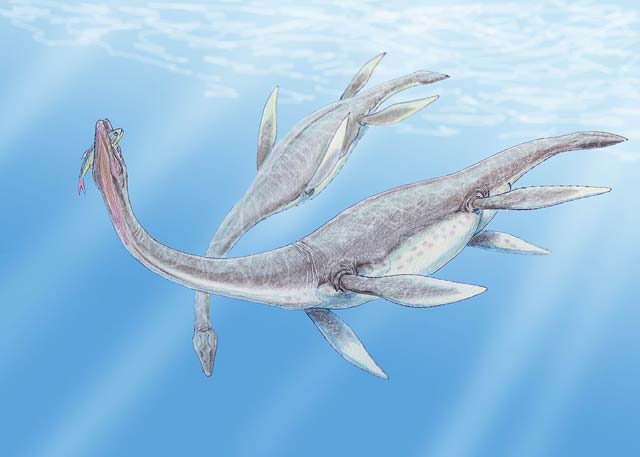 Plesiosaurus, part of the fossilised remains of one was found in the Northam pit.

Soon after the clay was discovered Eye farmer W. C. Moore who was leasing site from the Bishop of Peterborough set up his own brick-making business, Mr Moore’s Brickyard. He must have recognised the value of the site and purchased the land in 1897. He sold it to the Northam Brick Company very soon after. Below is a news article about the site from 1898.

By 1899 a rail siding had been built to the nearby Midland and Great Northern Railway. At the time virtually all the bricks from the site were distributed by rail. Trains with 30-35 wagons regularly left for destinations around the country. A short section of the footpath to the south-east side of the reserve follows the trackbed of the former line for a short distance.

One local building we know that was built with bricks from the works is Queens Drive Infants School in Peterborough. 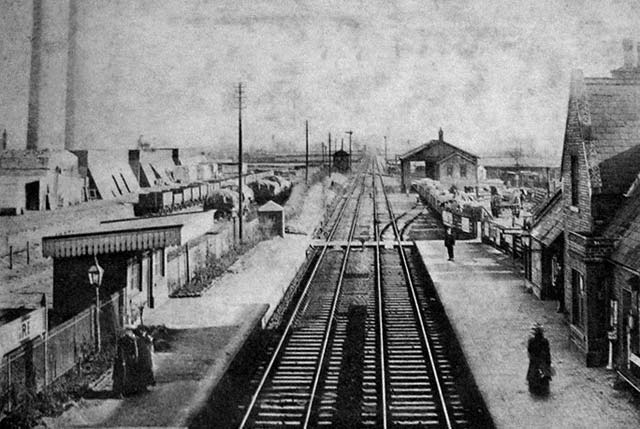 Eye Green station with the brickyards and the sidings to the left. The station was demolished in the 1990s to make way for the Eye bypass.

In September 1924, the site was acquired by the London Brick Company. Over the following years, the site was expanded and further kilns and equipment were installed. To make the site more efficient as the clay in the Northam Pit began to run out, an aerial ropeway from the nearby Star Pit in Dogsthorpe was added in 1928. This was most likely built by a company called Ropeway Limited of London. This allowed the clay to be carried efficiently from the Dogsthorpe pit which at the time had many years of extraction left. Today they would use a conveyor belt to do the same thing.

Once extraction at the Northam pit ceased the pit flooded, fed by natural springs. The eastern end is much shallower than the western end. 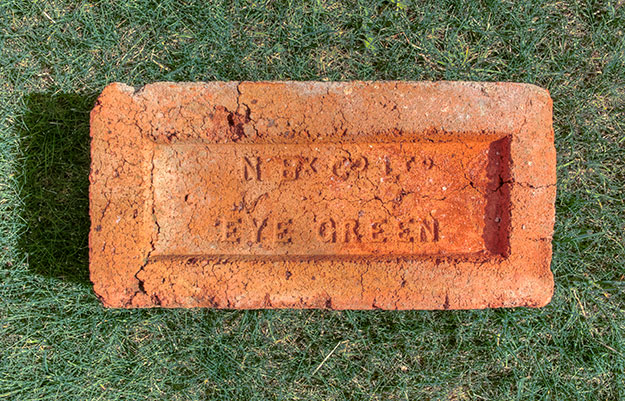 One of the millions of bricks that was created on the Northam Brickworks. Across the top, it says ‘N BK CO LTD’ standing for Northern Brick Company Limited. The bottom line says Eye Green.

During both world wars, the kilns were used for the storage of ammunition and on at least one occasion the yard was attacked by a German aircraft. An unexploded World War II bomb was reportedly found when the bypass was being built. During the war, the home guard used the local pits for training. 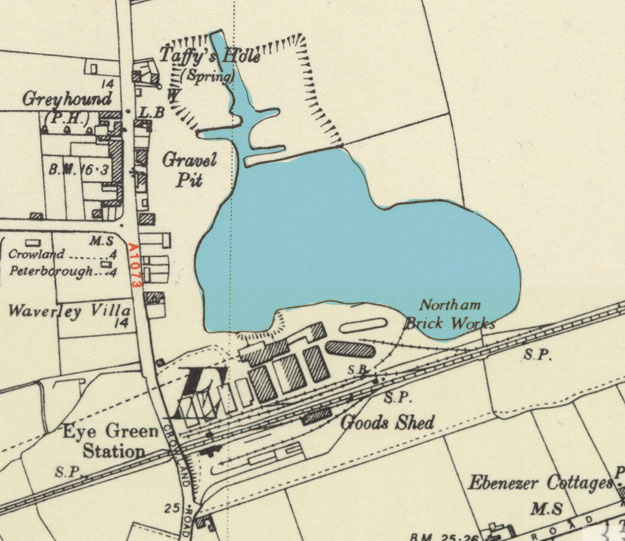 By 1950 the pit was full of water and very similar to how it looks now.

In 1956 the Peterborough Advertiser was reporting that the London Brick Company had laid out a new bowling green to the rear of its Crowland Road clubroom, the article also mentioned the football and cricket clubs which both played under the name Northam Star. 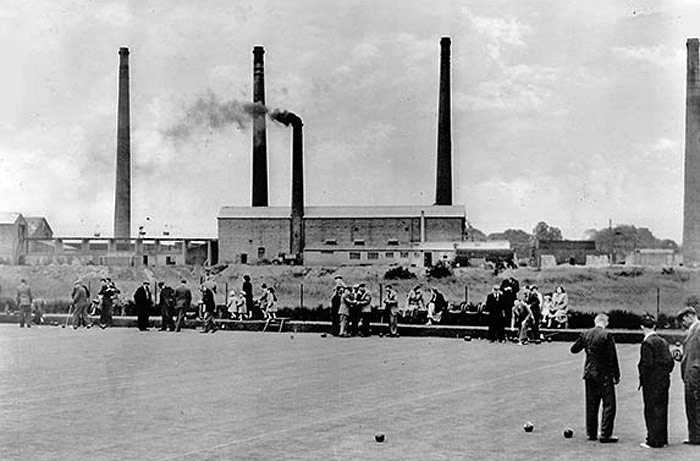 Looking across the site from the bowling green to the Northam Brickyards. The chimneys were around 90m high.

The railway saw the last ‘brick train’ leave the station in 1966 as road transportation took over. The video below, filmed on a Hi8 video camera, by Geoff Deboo shows a unique insight into a normal day at the works. Geoff said “My father (Arthur) asked me to film it as he knew it was due to be closed and you can see him in the video talking to Mr Snart the manager. I will always remember watching the men pushing those heavy wooden brick barrows to the railway trucks for loading and coal barrows up a steep wooden ramp for the burners and the smell of sulphur and brick dust.” As far as we know this is the only video of the works. 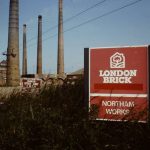 The view from the entrance of the brickyard 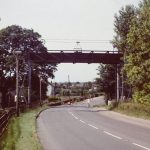 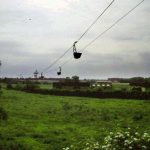 The ropeway as it heads west towards Dogsthorpe 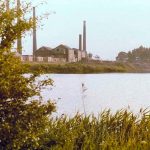 Rare view across the lake while the works were still standing

London Brick announced the closure of the Eye (and Dogsthorpe) works in 1990, it really was the end of an era, that yards had been in almost continuous operation for nearly 100 years. At the time the ropeway was one of the last remaining working examples of its type in England, the last is at Claughton Manor in Lancashire which was constructed in 1924, four years before the ropeway (video) (photos). The chimneys and the site were demolished not long after. The station was eventually demolished to make way for the Eye bypass which opened in October 1991. You can read more about the railway line here and in the book Peterborough to Kings Lynn: Part of the M&GN, published by Middleton Press, available from online retailers and local libraries.

The lake was used as a diver training centre for a number of years and the local sub-aqua club ran Northam Pit as a national dive site. A sunken Comma van still resides in the middle of the lake from that time.The large pike that inhabit the lake did put some people off. There were lots of stories of some very large ones living in the lake, the average length of a pike is about half a meter, with maximum recorded lengths of up to one and a half metres and they are thought to be able to live up to a maximum of 50 years.

The site was declared a nature reserve 1996. It was created with grants from English Partnerships and Hanson Properties. With funding for bridges, it was feasible to add a footpath around the lake. 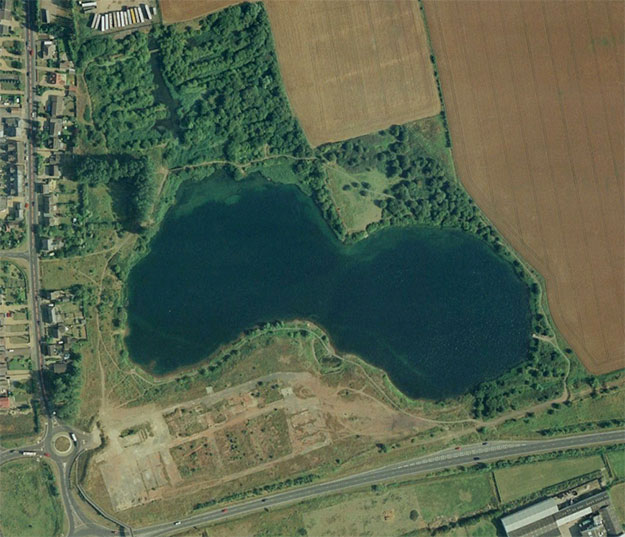 Aerial photo of the nature reserve in 1999. Map data: Google.

In 1999 plans for 14 houses and 2 bungalows were submitted for planning permission to the west of the lake, now Pershore Way.

In 2012 the site of the former brickworks was included in the ‘local plan’ (a statutory document which sets out the overall approach to development across the city) with an ‘indicative’ 35 homes. In 2014 plans for 55 homes were submitted to the local planning office which included a small car park for the reserve. This was initially refused by local planning officers but won on appeal by the developer. Later new plans for 67 homes were put forward which were approved. The Ecological Mitigation Strategy includes homes for bats and planting fruit-bearing trees to provide foraging habitat for birds and invertebrates. Construction on the site started in 2019 and will be completed in 2021. 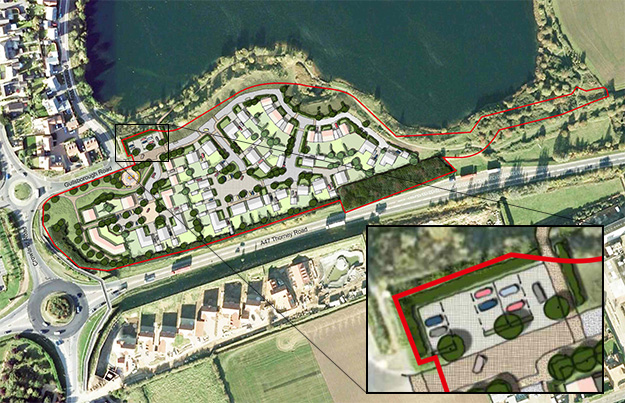 The original plans for 55 homes

Walking around the lake today you might never know the long history of the site. The only construction that remains from the time of the brickworks is the supporting wall to the south of the site. 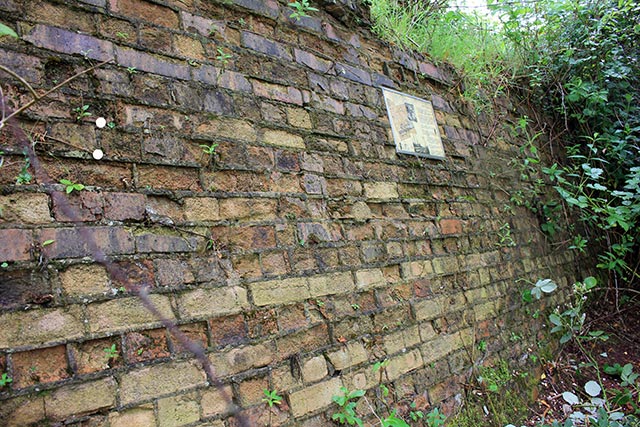 This supporting wall to the south of the reserve is the only remaining structure from the Northam Brickyard. 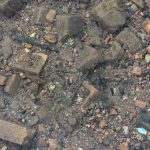 Bricks cover the floor of the lake on the north side. 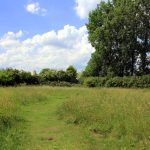 The old bowling green, now a wildflower meadow and home for rabbits. 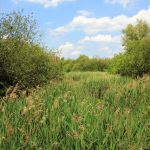 Looking north across the gravel pit, the oldest worked part of the site. 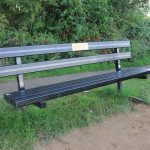 One of the benches at the west end of the lake is dedicated to Bill Green, who was a dedicated volunteer at the reserve. 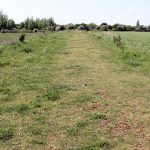 Looking west along the trackbed for the former railway towards the reserve. 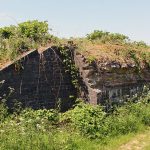 Remains of one of the bridges for the railway to the east of the reserve. 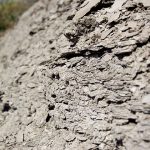 Layers of clay can still be seen a the nearby Star Pit Nature Reserve. 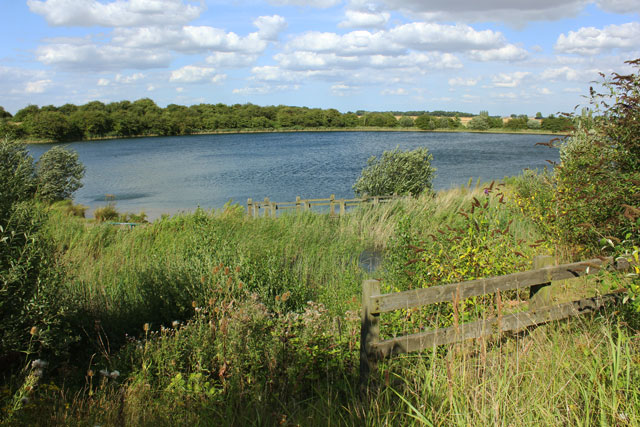 View across the nature reserve in 2014.

Photos of the Northam Brickyard site before it was developed for housing. 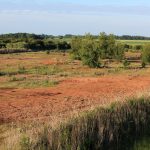 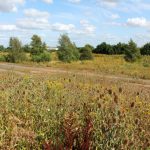 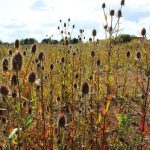 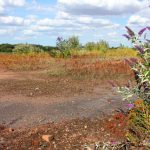 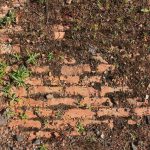 In 2019 heavy machinery was brought in to prepare the land for housing removing the last vestiges of the former brickyard. Must of the remaining material now makes up the subsoil of the new housing estate.

Just for comparison, a then and now view from a similar location.

View across the former brickyard from the footbridge today.

Until 2016 the reserve was maintained by the Wildlife Trust for Bedfordshire, Cambridgeshire and Northamptonshire. It was handed back to Peterborough City Council in 2016 following the plans for housing on the adjacent former Northam Brickyards site. Representatives from Peterborough City Council met with the Parish Council in July 2016 and discussed the future of the site. The Wildlife Trust gave a statement at the time “The value of the site has been, and will continue to be, diminished due to an increase in housing developments close to the site.” Despite this, the site is still an asset to the community and a refuge for many types of wildlife.

In 2021 management of the site was handed to Froglife, a national wildlife conservation charity concerned with the conservation of the UK’s amphibian and reptile species and their associated habitats. 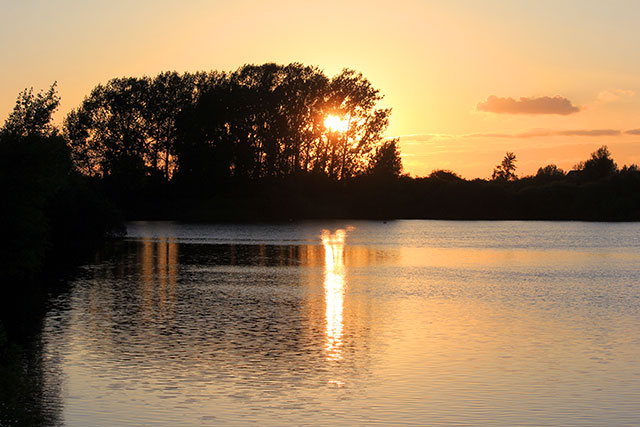