In 2018 poppies where attached to lamp posts around the village in recognition of the soldiers in the village that fought and died during the Great War.

Sunday 11 November 2018 marked 100 years since the end of the First World War. At 11 am on that day in 1918, on the ‘eleventh hour of the eleventh day of the eleventh month’, the Armistice ended fighting on land, sea and air in World War I between the Allies and their opponent, Germany.

As to the day of the armistice, the book Eye Life says “Actual news of the cessation of hostilities on 11th November 1918, was brought to Eye by a Deacon’s schoolboy. The school had been told the joyful news and the scholars instructed to go home. The Eye boy, on arriving in the village, called to tell Mr Yates at the village school. He was given the privilege of telling the boys and girls. From then on, the intelligence spread rapidly through the village. The church bells were rung continuously until four o’clock in the afternoon, flags and bunting appeared as if by magic, and there was great excitement everywhere.” It goes on to say that by 1918 some 227 Eye men were away in the forces, mainly serving in the Northamptonshire Regiment. Miss Little and Miss Yates were serving in the nursing service.

In 1920 ‘The Souvenir Book of Eye’ was printed. It was one of the last acts of the ‘Eye Patriotic Association‘ which was formed at the start of the war to support the war effort in the village. Its aim was also to support the Red Cross and the men from the village who went to battle. The Souvenir Book of Eye which was edited by the Reverend L. P. Field includes notes, photographs local men who had fallen in the war. One of those men was Sidney Cousins.

Before the war, Sidney was a clerk at the goods office at Eye Green Railway Station. Born in 1896 he was the son of Walter and Kezia Cousins of Swanton Novers, Melton Constable, Norfolk. At the time Melton Constable was one of the main centres of the M&GN, the company that owned the railway line that went through the village. The job would have involved a number of activities including administration relating to the transport of goods on the railway and notifying customers that their goods had arrived.

In November 1915 Sidney enlisted into the Royal Bucks Hussars. In May 1916 he went to France and served with the Royal Field Artillery and was later transferred to the 5th/8th Heavy Trench Mortar Battery of the RGA.

For efforts on the battlefield on he was awarded the Distinguished Conduct Medal (DCM). Further details were later reported in The London Gazette: “For conspicuous gallantry and devotion to duty when, having lost the detachment of his trench mortar, he kept it in action with the assistance of infantry stragglers, until the enemy were close up to his emplacement when he put the gun out of action. Seeing an officer nearly surrounded, he warned him at great personal risk, enabling him to get away, and afterwards assisted him in organising the defence of another position with infantry details.” The DCM was only awarded for exceptional bravery. It was first instituted in 1854 during The Crimean War, to recognise gallantry. 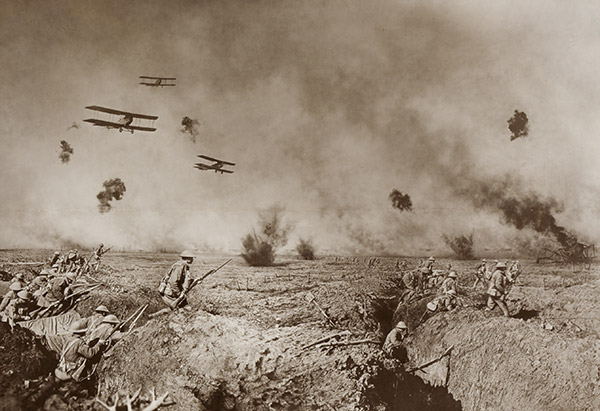 By the start of 1918, Sidney had been fighting on the front for nearly two years. He was looking forward to coming home to be married to a Miss Dorothy Atkinson but having survived the majority of the war disaster was to follow.

Extract from a letter from his commanding officer explained what happened: “A fire broke out in a gun-pit, and he and another N.C.O. (Non-Commissioned Officer) at the head of their men proceeded to put it out. Unfortunately, the fire reached the ammunition, which exploded, blowing all the men out of the emplacement. He was alive when picked up, but died on the way to the dressing station. We had a very impressive funeral and he was buried next to his friend the other N.C.O.”

Sidney Cousins sadly died of his wounds on the 9 July 1918 and is buried in Aix-Noulette Communal Cemetery Extension, Pas de Calais, France. Sidney is also remembered on the village War Memorial and the Swanton Novers war memorial in Norfolk. Dorothy went on to marry  William Gates in 1927. 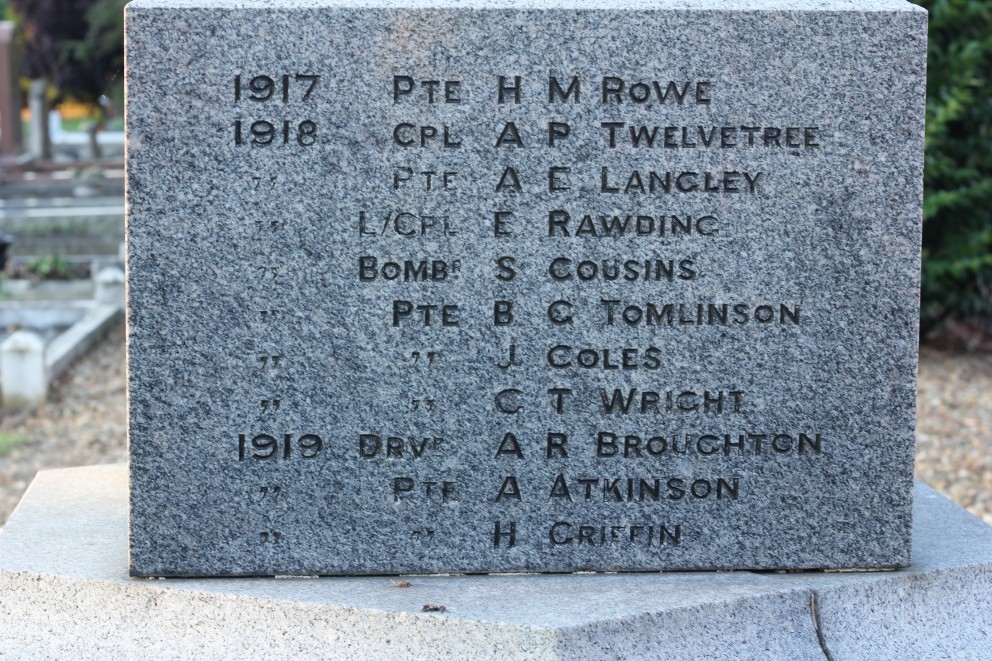 A number of events took place across the area over the weekend and on Remembrance Sunday, 11 November 2018. Bells rang out in unison from churches and cathedrals in villages, towns and cities across the country. Beacons were lit across the country at 7 pm. 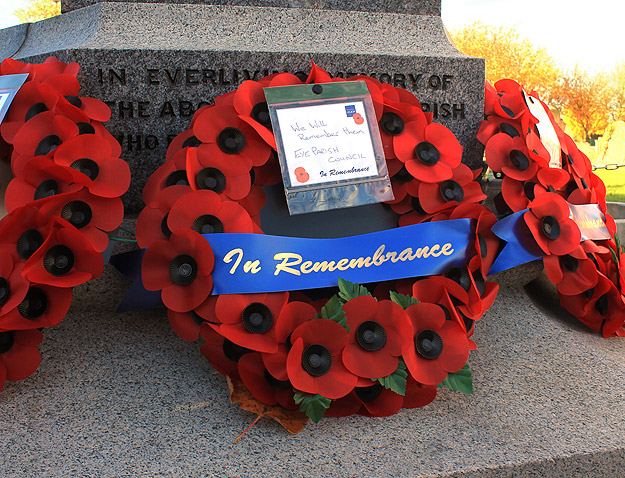 Eye
A free screening of the movie Journey’s End took place in St Matthews Church at 7.30 pm on Friday 8 November 2018.  Released in 2017 the dramatic film is set on the western front in 1918. It tells the story of a group of British officers film who’ve been posted to a dugout in Aisne, France. The film is rated 12A. More here.

On Sunday to mark this important day a short service from 10.45 am including two minutes silence at 11.00 am took place at the war memorial on Crowland Road. A display relating to those that died during the Great War in Eye was available to view in the church after the service. 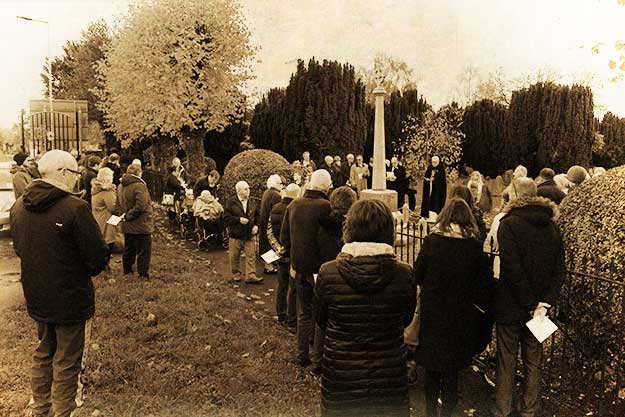 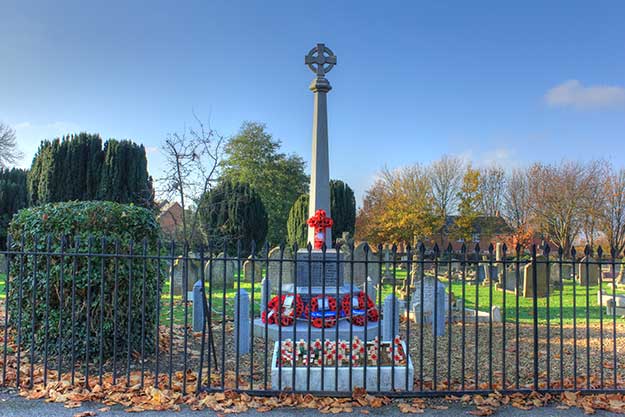 Thorney
Nearby Thorney held a Remembrance Day service at Thorney Abbey from 10:30 am – 11:30 am. During the day there was also an exhibition from 11 am – 4 pm at the Bedford Hall which included displays about those who fought and lost their lives in the Great War. 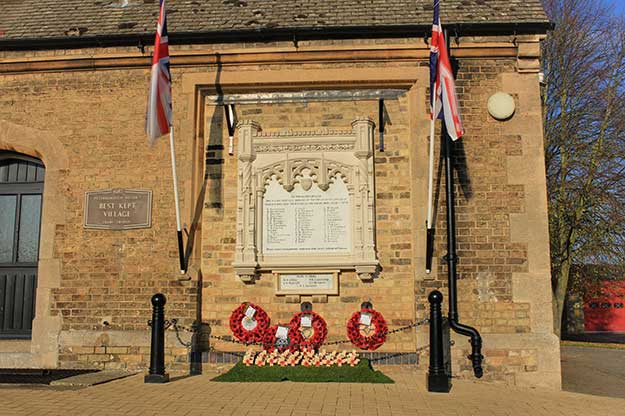 Newborough
The village held a Remembrance Service and wreath-laying at the war memorial. 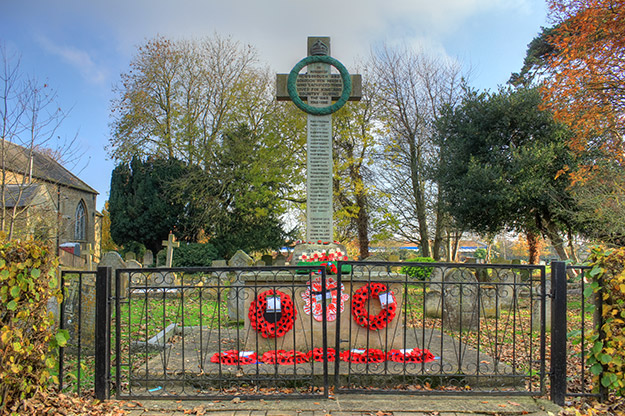 Peterborough City Centre
A bagpiper played in the Cathedral precincts at 6.00am. From 10.55am there was wreath laying and two minutes’ silence at War Memorial on Bridge Street followed by a procession.  At 11.45am a special remembrance service at the Cathedral and at 12.30pm the bells of the Cathedral were rung. 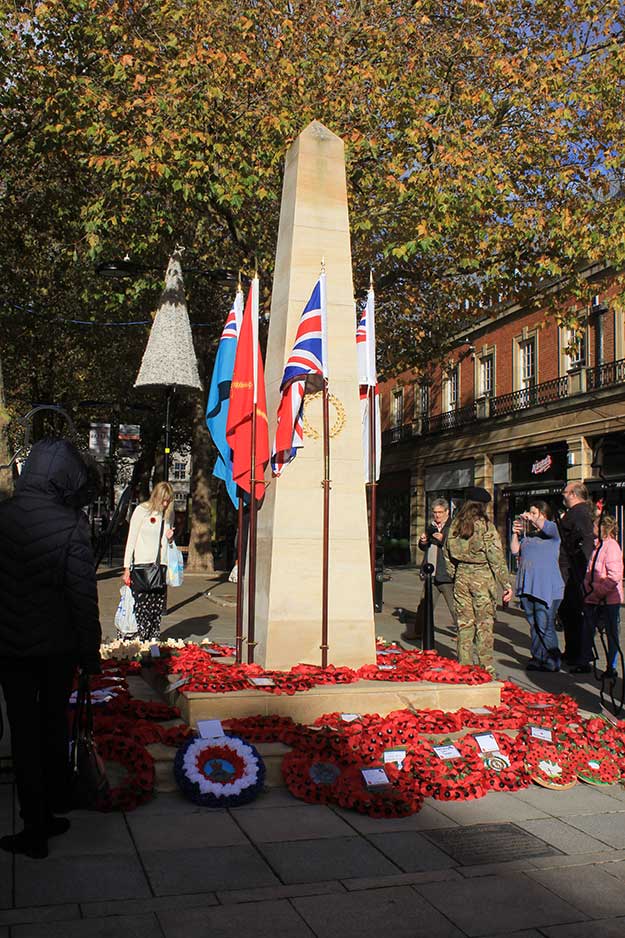 Across the village, you may have seen these words.  They have become especially familiar as they were adopted by the Royal British Legion as an Exhortation for ceremonies of Remembrance. But there are a lot more ‘stanzas’ to the poem.

It was composed by Laurence Binyon on the Cornish coastline and was written in mid-September 1914, just a few weeks after the outbreak of the First World War.

The poem in full

With proud thanksgiving, a mother for her children,
England mourns for her dead across the sea.
Flesh of her flesh they were, spirit of her spirit,
Fallen in the cause of the free.

Solemn the drums thrill: Death august and royal
Sings sorrow up into immortal spheres.
There is music in the midst of desolation
And a glory that shines upon our tears.

They went with songs to the battle, they were young,
Straight of limb, true of eye, steady and aglow.
They were staunch to the end against odds uncounted,
They fell with their faces to the foe.

They mingle not with their laughing comrades again;
They sit no more at familiar tables of home;
They have no lot in our labour of the day-time;
They sleep beyond England’s foam.

But where our desires are and our hopes profound,
Felt as a well-spring that is hidden from sight,
To the innermost heart of their own land they are known
As the stars are known to the Night;