Eye Parish Council were delighted to welcome Louis Smith MBE to our June meeting. Louis, who grew up in Eye has three Olympic medals in gymnastics – a bronze from Beijing 2008 and a silver and bronze from London 2012. He also won the BBC show Strictly Come Dancing and received an MBE in 2013 for services to gymnastics and the London 2012 Olympic and Paralympic Games. Louis was welcomed to the Leeds Hall along with his mum and was presented with the Eye Community Shield. The shield is given for services to the community. 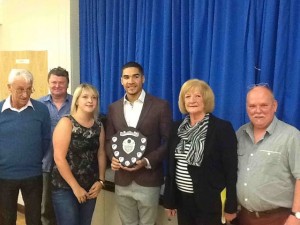